I used to blog on another platform. Check out what I shared in earlier years here.

During term 3 we have been making potato people, decorating them with all the sorts of material and we used glue and sticks. We had to pick a potato we liked the shape of and then we had to decorate it so that it looked like a person. When the potato people were finished they looked really cool and then we were ready to make our movie.

We had to practice how to make a stop motion movie by taking turns to be the director, cameraman, scene manager and editor. We had to make the potatoes move to the left and then move them to the right and we had to take a picture each time.

I was in the group that had to make a background of the inside of the castle. We painted it red and then stuck a picture of the Queen on the wall. We made 3 purple thrones for the potatoes to sit on.

After that we had to go to the Library with Ms Toland and make our part of the movie. We did the same thing as before and then we had to record  a voice  to make the potatoes look like they were talking we had so much fun recording the movie and I want to do it again. The title is the stolen princess.

I hope everyone enjoys watching it. 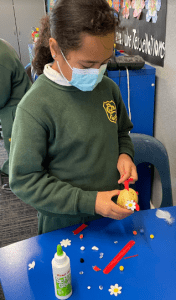 7 thoughts on “Making our class movie.”

About Me | Ko Wai Ahau

Add the link to the About Me blog post here.

Keep connected with this blog